You know the sexist saying: “The difference between the men and the boys is the price of their toys”? Well here are six of my recent favorites, ranging in cost from tens to tens of thousands of dollars:

1. “Nissan Leaf”
We’ve now driven 7500 miles in this all-electric car without an oil change or any maintenance – there is nothing under the hood to maintain!

We plug in to a 110 Volt outlet at home in the evening and for about $3 worth of power, we can drive 100 miles the next day at any highway speed allowed and with the great acceleration that the high torque of an electric motor can provide.
The plug-in socket seems to be sufficiently weatherproof for outdoor connections but I don’t leave it connected in violent thunderstorms.

The big fun part is plugging into public outlets at pay-parking spots where the power is included:

Or even better, after hours with free parking, or at The Toledo Museum of Art and a few other noble institutions, where the power is not only totally free, but with their 240 Volt systems the charging speed is much greater.
Sometimes you get to the spot shown in your iPhone ap only to find it occupied – but if it’s by as sleek a car as this Tesla (with 195 miles charge showing on the instrument panel) in ‘our’ spot in Bowling Green last week then it’s hard to complain: 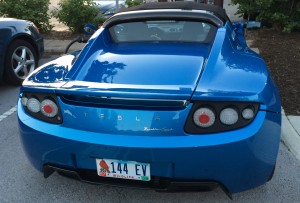 Perhaps there really is a “free lunch” after all!
The Leaf is not quite as useful as my old gas-drinking Merc. for carrying my water toys but that’s a separate issue. 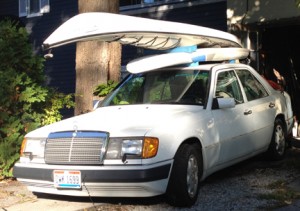 On Scott’s suggestion, I was surprisingly able to slip the Prodigy windsurf board, sail and two piece mast completely inside the leaf.

2. “WinBot”
This device improves on the horizontal running Roomba floor vacuum robot, by sucking onto a vertical flat glass surface with a slippery silicon suction cup.

High friction caterpillar tracks drive it across the glass and micro fiber pads wash and wipe it clean. It runs around from edge to edge and corner to corner on its own program, or for fun with kids they can steer it through the window with a remote controller.
Obviously much valued for difficult to reach glass.

3. “iPhone with ōlloclip” Macro Close-up Attachment.
(OK it’s not exactly an electric toy but it does fit on my electric iPhone which still amazing works after being dropped from 4 ft. (over 1 m) into a shallow puddle!)

This little clip-on device allows you to go from this close with your standard iPhone when it is set on max. zoom: 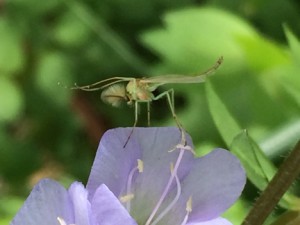 Please note: no midges were harmed by the photographer in the preparation of these images! The first one simply flew away, and the second one was removed, dead, from a spider’s web – much easier than trying to actually catch one with a net. You can see the scale by appreciating that the wooden stick is the tip of a tooth pick. The midge is only about 2 mm (1/16 inch) long. I’d like to know its name if you have it? 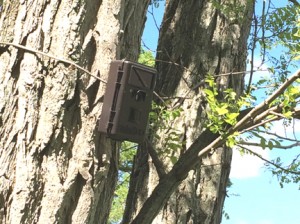 Here is the best night time photo, so far, from six months up a tree on the wild life corridor, down by the Maumee River. The camera is triggered by the Infra Red heat of a creature and takes pictures every 10 seconds until it goes away: night time roaming of the coyote – looking for stranded skiers?

Naturally, I now also have a few thousand daytime images of squirrels and geese. In Owen Sound, Ontario, my friend Brian’s CritterCam caught this porcupine:

He is still trying to get the cougar who’s footprints he has seen in the snow.

5. “GoPro”
This amazing waterproof camera, clipped to the boom of a windsurfer, took the videos seen in previous years’ Cape Hatteras blog postings.

With a head harness,

it will easily record cross country ski trails (see past winter blog posts) and anywhere else a head is foolish enough to venture, as in the recent May New Yorker magazine cartoon: 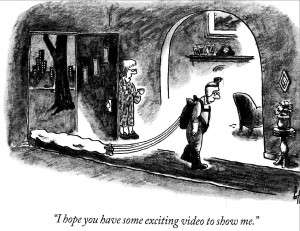 6. “The Drone”
The most awesome toy is the combination of a GoPro camera with the DJI Phantom II QuadCopter drone. 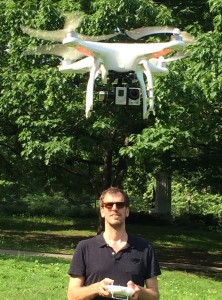 The proportional controls (not simple on/off switches) are three separate joy sticks on the one flight and photo command box. Simply releasing the controls returns them all to a neutral hover mode so it is not impossibly difficult. The drone uses compass, altitude and GPS readings to control itself, and can beam live video back to an iPhone if you need!
Architectural photographer John Muggenborg cautiously allowed me to take the controls during this ‘surveillance’ flight of Manhattan from Fort Greene in Brooklyn, but I take little credit for the following video.
http://youtu.be/eGD7ET6bhJY
John’s great real work is well worth seeing at www.johnmuggenborg.com